In this second of 10 weekly blogs celebrating the launch of his new book, Graeme reflects on the paradox of change: Only by changing can organisations be sustainable.

When discussing sustainability, it’s important to be clear that we are not arguing for maintaining the status quo or being resistant to learning and change. Quite the opposite – non-profit organisations usually exist to change the status quo. Sustainability does not mean ‘sustained’. 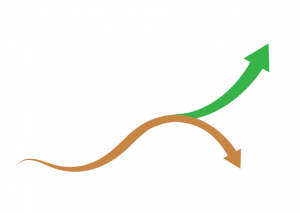 Illustration: Stability is ephemeral – organisations are dynamic, going through cycles of development or decline.

Talking about sustainability can also sound like organisations are primarily interested in their own survival. This is dangerous because non-profit organisations exist to serve a purpose other than their own existence. Sustainability is not about keeping things going. Nowhere in your organisation’s constitution or founding documents does it say the organisation exists for its own sake, or to pay people’s wages – important though that is.

It might not even be desirable or necessary for an organisation’s work to continue. Many non-profits exist to build capacity so that other people, communities or organisations can provide for themselves. If you don’t withdraw from some projects or areas of work, you won’t have the capacity to reach new ones. And you’ll just create dependency. So, sustainability is fundamentally about making a sustainable impact, for example leaving a legacy so a project’s work or messages can carry on without it.

Keeping organisations going, keeping people in a job, or making sure projects are funded might all be important. But if organisations pursue them for their own sake they will, paradoxically but almost certainly, become unsustainable.

It is counterproductive for organisations to focus on sustaining their work for its own sake because:

Few funders fund activities, or even outcomes, for their own sake these days. Whether they call it this or not (and most don’t, yet), the trend is towards funding being a form of action research, investing in projects to generate learning about unmet needs and how they can be most effectively addressed.

Sustainability requires learning and change, not maintenance and stasis. In a changing world, the only certainty is that organisations that don’t adapt will fail. Stability is ephemeral and leads to stagnation.

That’s why innovation and learning are key to sustainability. One of the central themes of my book is that organisations need to continually learn and adapt. Learning what to sustain – and what to let go – is crucial.

The Change Paradox: Only by changing can organisations be sustained.

Principle: Sustainability does not mean ‘sustained’.

This is an adapted excerpt from my new book, Making a Lasting Difference. Published by Wren and Greyhound, it is available as a 220 page paperback for £14.99 from Flying Underground and from Amazon, where it is also available for Kindle (£4.99).

The 7 Domains of Sustainable Impact – Part 4

Pandemic but no panic